The “Augmented and Virtual Reality in Operations: A guide for investment” study, released by Capgemini Research Institute, surveyed more than 700 executives familiar with their companies’ VR and AR efforts in the manufacturing, automotive, and utilities sectors. It found that 50 percent of organizations not currently implementing VR and AR are planning on exploring their options within the next three years. Initiatives cited include using VR to help train employees and using AR, combined with handheld or wearable devices, to provide real-time access to experts.

Although the survey revealed interest in both VR and AR, organizations believe AR will be the more beneficial technology, despite its increased complexity. AR can generated a more streamlined workflow, according to those surveyed, with respondents pointing to examples including Porsche’s use of AR glasses that provide both detailed diagrams and step-by-step instructions. Furthermore, experts at Porsche can see what their technicians are looking at, enabling remote expertise to aid in an array of tasks. According to Porsche, these advances can reduce service time by up to 40 percent. Companies are also bringing AR solutions online at a faster rate; 45 percent of companies interested in AR are already deploying the technology, compared to 36 percent of companies aiming to implement VR.

Although VR and AR technologies are expected to be used throughout a wide range of fields, some areas are already seeing high levels of implementation. According to the survey, 31 percent of companies are using VR or AR to consult digital reference materials. Thirty percent are using it to connect users with remote experts, and 30 percent are using it to view components digitally. Twenty-nine percent are using it to superimpose step-by-step instructions on workstations. Between 26 and 28 percent of companies are using VR or AR for design and assembly tasks including overlaying design components onto existing modules, visualizing infrastructure from various angles, and simulating product performance in extreme conditions. Safety is a goal of VR and AR as well, with the report citing Ford’s use of VR to capture body motion sensors to improve operations, leading to a 90 percent drop in ergonomic problems and a 70 percent reduction in injuries during assembly.

The report outlined four factors common among the top 16 percent of VR and AR adopters. To replicate the success of these early achievers, the report suggests companies provide a centralized governance model to increase VR and AR awareness. Companies also should invest in agile, in-house teams of experts to better craft and implement solutions. Finding the right use cases was critical, and companies can improve their adoption rates by focusing on the most valuable uses of VR and AR and supporting employees during the adoption phase.

Finally, companies need to invest in infrastructure capable of handling VR and AR technologies, as older systems might lack the flexibility and robustness required for a successful roll-out. It should be noted that VR and AR adoption varies geographically, with more than 50 percent of surveyed companies in the United States and China already rolling out VR and AR initiatives. In the United Kingdom, France, Germany, and Nordic countries, more that 50 percent of companies are still in the experimental phase. 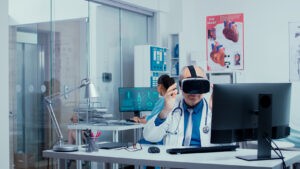 Could VR play a critical role in making the healthcare sector more efficient? 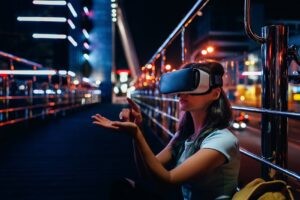 The Unseen Value of VR Data

Extended reality and mobile advertising: how immersive technology is being reclaimed by non-gaming apps
The CISO must be – first and foremost – a Leader
What Does the Future of Shopping Hold in the Fashion Industry?
Service Collaboration: The Key to Ongoing Operational Resilience
The Farm of the Future: Cultivating Connections When They are Needed Most
Tackling security to avoid regulation

Extended reality and mobile advertising: how immersive...
The CISO must be – first and...