How Sound in Motion has Driven Decades of Innovation in Public Safety. And Why it Will Drive Devices More

As Motorola Solutions celebrates its 90th anniversary, it’s worth taking a look back to then look forward to the technological innovations that support the emergency services sector

It was September 25, 1928 that Paul V. Galvin and his brother, Joseph, incorporated Motorola’s founding company—the Galvin Manufacturing Corporation, but the real starting point for what followed was 1930. Here the company created the first commercially successful car radios and alongside this the brand name Motorola — linking “motor” (for motorcar) with “ola” (which implied sound). Motorola literally meant sound in motion.

1940 saw Galvin engineers take sound in motion to the next level with Handie-Talkie SCR536 AM portable two-way radio, which became a World War II icon. Following various evolutions of this technology, in July 1969 came the Motorola radio transponder, which relayed the first words from the moon to Earth. The transponder aboard the Apollo 11 lunar module transmitted telemetry, tracking, voice communications and television signals between Earth and the moon.

No room for Good Enough

There are three major trends that we expect will develop over the coming decades and create significant pressure on governments, and, consequently, on public safety organisations: urbanization, extreme weather events and our continued geographical interconnectedness resulting from globalisation. In fact, urban growth alone is already significantly challenging mission critical infrastructure to keep pace with the change.

It will also make it difficult for public safety agencies to keep up with the crime that can come from the rising concentration of urban dwellers. And compounding the challenges of urbanisation is the increased rate of extreme weather events every year. Hurricanes, tsunamis and earthquakes are more frequent then before, and the cost in lives and property is also increasing. Last but not least, we see an increased cross-border and cross-continental movement of people and goods, not only physical, but also online and through social media.

So what does this mean for the types of emerging technologies that could hold real value when it comes to saving lives?

In our current transformational age, emergency services staff need cutting edge technology, but it’s also got to be based on proven technology. There’s no room for ‘good enough’ tech that can be updated when its out in the field. It’s got to work out of the box.

Right now, this out-of-the box innovation is focused on better intelligence. Think of it as data that at best helps prevent emergency situations from happening or otherwise significantly reduces the cost to human life. Better intelligence means building safer cities and communities where information flows between citizens and emergency services. It’s about technology that allows police, fire and ambulance services to better collect information, make it actionable and available across secure devices and easy-to-manage networks.

It is the technology and expertise that takes sound in motion to turn information into intelligence, and intelligence into safety.

Here it’s no surprise that the most prominent emerging technology will come from artificial intelligence (AI). All devices and objects in our daily lives and working environments can and will become smart, and AI will rethink everything we are doing in public safety, applying it across mission-critical communications.

AI provides advantages across a range of technologies. Take for example the Command and Control where we have been building software that essentially gives police forces the ability to handle emergency calls, dispatch officers and then keep a record of the whole incident. AI can completely transform this space and help those in the control anticipate and forecasting incidents and deploy resources even more effectively.

This future is less about a Robo Cop and more Robo partner. Moreover, the best chess player in the world today is not an AI or a human grandmaster, but rather a team that brings human creativity and strategy augmented by deep machine learning.

Video is and will continue to be a major component of the emerging technology mix. The body worn cameras we hear so much about are on side of the innovation. The other side is the ability to actually analyse the content they capture, a recognising the unusual from the ordinary, not just count people or identify faces.

Any technology used by emergency service workers needs to simplify the complex situations they often face.  For example, one important feature is to help them remain “heads up and hands free” –performing tasks on the move without being burdened by the need to type or ‘swipe’. Hence, we’re likely to see more voice activated controls. It’s something we already see in the virtual assistants such as Alexa that are gaining popularity in the home.

Imagine the difference these technologies can make for people performing life-saving work, such as a firefighter running into a burning building or an ambulance officer providing urgent aid.

Andy finally, as software and AI become increasingly central to the technology solutions, innovations will inevitably move toward cloud-based platforms. This Public Safety cloud will offer all the mission-critical attributes that emergency services professionals need but in a far more agile manner.

When you think about the major three major trends facing public safety, this type of agility becomes central to the evolution of sound in motion. 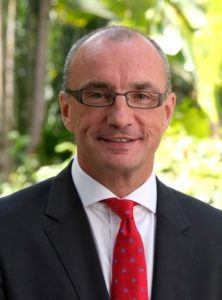 Iain Clarke is responsible for the overall business performance of MSI in Europe, Middle East and North Africa. In this role he leads a multi-disciplinary team comprising sales, deployment services, operations and strategy. Prior to his role in EMENA, Iain was based in Singapore and led Motorola Solutions’ Asia Pacific business.