Microsoft have announced that HoloLens, their self-contained holographic computer, is now available for pre-order in several countries including the UK, France and Germany.

The news comes while HoloLens is experiencing tremendous excitement and interest from developers and commercial customers and partners around the globe.

“Since the launch of Microsoft HoloLens, we have seen really passionate developers and world-class companies develop groundbreaking computing experiences — experiences only possible on HoloLens,” said Alex Kipman, technical fellow, Microsoft Windows and Devices Group. “When we set out to pioneer the mixed-reality category, we knew that many of the best innovations would be discovered when others got their hands on the technology. It has been quite inspiring to see what our partners have built and what individual developers have created.

Together, we have only scratched the surface for what mixed reality can do. I can’t wait to see what happens next as we welcome these new countries to our holographic landscape.”

Since the launch of HoloLens, Microsoft has seen innovation happening across the board as a diverse set of companies and partners breaks new ground within its industries using HoloLens as a means to transform their business.

The OnSight project enables scientists to use HoloLens to “work on Mars” together, directly from their offices, allowing them a means to plan and, along with the Curiosity Mars Rover, conduct science operations on the Red Planet. By extending the OnSight project, in September the two companies opened “Destination: Mars” at the Kennedy Space Center to the public, which allows visitors the only opportunity possible today to walk around the Red Planet, just as NASA scientists do today. The Sidekick project brought HoloLens to the International Space Station to enable station crews to get remote expert assistance when and where they need it, reducing crew training requirements and increasing the efficiency at which astronauts can work in space. The NASA team created the ProtoSpace HoloLens application to build the next generation of spacecraft and space rovers; the application brings 3-D spacecraft designs into the world to help improve the design process

With the global expansion of HoloLens, more commercial partners are set to deliver new experiences that will allow their employees and customers to discover new ways to work.

“Audi is invested in leading the future of automotive design through the use of cutting-edge technologies. A technology like Microsoft HoloLens could open up new opportunities for our services in many ways — from engineering reviews and collaboration to after-sales scenarios and new ways of customer experiences. There are many use cases to be realized,” said Jan Pflüger, Coordination Augmented and Virtual Reality at Audi IT.

“A mixed-reality solution like HoloLens seems very promising in helping us improve service quality, innovate on our customer communication, and cut time and costs required for maintenance. We see an exciting future in this technology and look forward to expanding its use at Audi.”

Today, HoloLens customers are developing innovative solutions that are already having a positive impact on their business. These customers are the early adopters of the kind of mixed-reality solutions that are poised for exponential growth in the years to come. According to IDC, “worldwide revenues for the augmented reality and virtual reality market will grow from $5.2 billion in 2016 to more than $162 billion in 2020.”

Windows 10 will be updated in 2017 to include Windows Holographic, the platform that powers the mixed-reality experiences enabling people to perceive the world differently, break down barriers, and bring the virtual and the physical worlds together. In June at Computex, Microsoft announced that Windows Holographic is coming to Windows 10 PCs and head-mounted displays to deliver incredible new mixed-reality experiences. 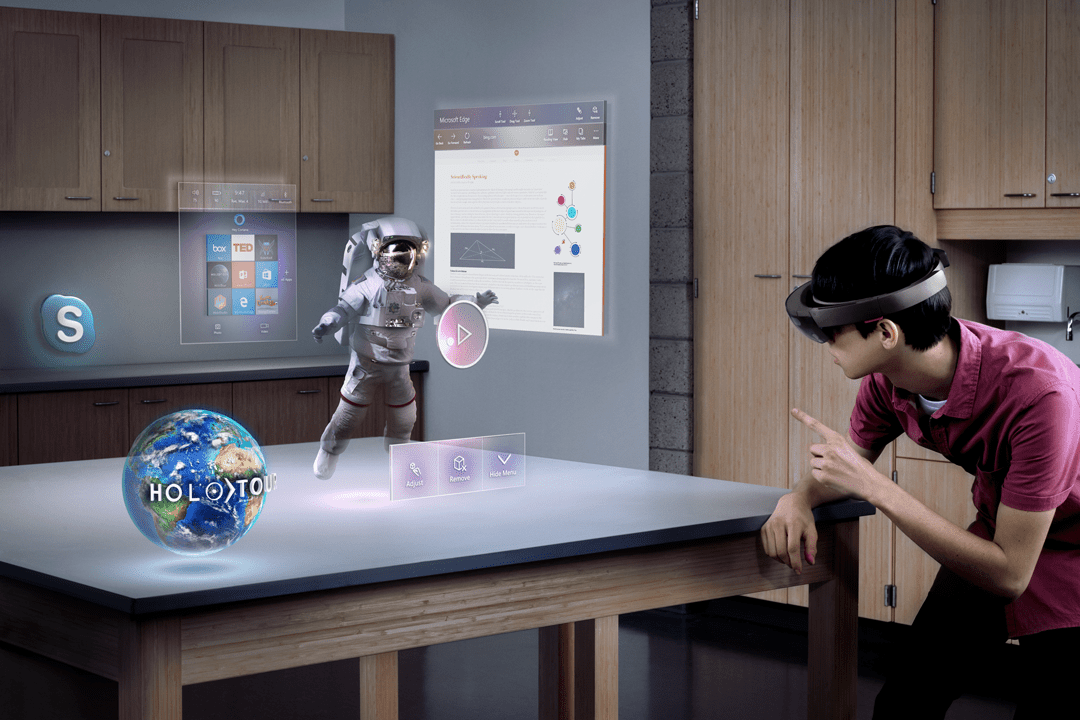