The risks and benefits of commercial drone use

Whether used commercially for industrial inspections, aerial photography, border patrol, emergency deliveries and crop surveys or recreationally by millions, drones or unmanned aircraft systems have the potential to become a multi-billion dollar business and deliver problem-solving technologies across numerous industries.

However, more drones in the skies also raise a number of new safety concerns, ranging from collisions and crashes to cyber-attacks and terrorism. To ensure safe UAS operations, systematic registration of unmanned aircraft and robust education and training of operators is necessary, according to a new report from aviation insurer Allianz Global Corporate & Specialty.

“There have already been enough incidents and near-misses to date involving UAS to generate concern that the likelihood of collisions and other loss events will grow as numbers multiply,” says James Van Meter, an Aviation Practice Leader at AGCS. As drones are becoming smaller, cheaper and easier to use – and regulatory change, particularly in the US, lowers barriers to entry – growth prospects are surging: The US Federal Aviation Administration forecasts that by the end of 2016 in the US over 600,000 UAS will be deployed for commercial use alone – three times the number of registered manned aircraft. In addition, 1.9 million UAS are expected to be in recreational use. Globally, the UAS market is forecast to reach 4.7 million units, or higher, by 2020 with the market for commercial application of UAS technology estimated to soar from $2bn to $127bn. 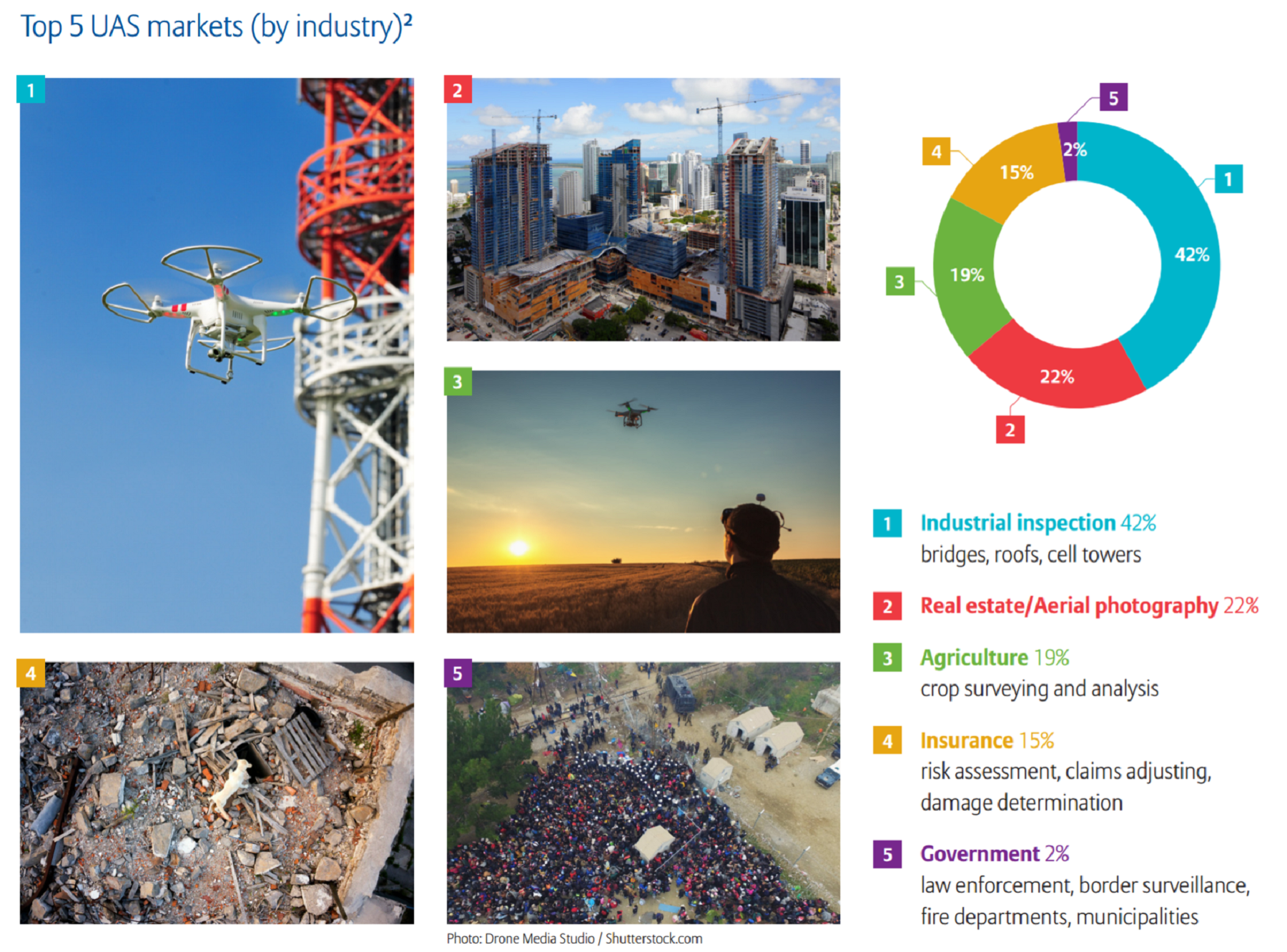 Made for menial or dangerous tasks

“UAS in commercial use will increase greatly in the next decade because they are effective at carrying out menial or dangerous tasks,” explains Thomas Kriesmann, Senior Underwriter General Aviation, AGCS. Work accidents such as employees falling off the roof on building inspections and workers compensation losses are expected to decrease as a result. UAS also have the potential to both solve problems and save costs in future across a number of other industries, throughout the developing world and in disaster relief situations. Emerging uses include delivering blood and vaccines to remote locations in Africa, fighting grass fires, pest control and even delivering pizza and coffee.

Insurers are also increasingly utilizing UAS to make risk assessment of construction or infrastructure projects easier and safer. Claims handling can also be made quicker and more effective by using drones to survey loss damage after major catastrophes. For example, when parts of Tianjin, China, were rendered inaccessible after major explosions last year, high resolution images taken by UAS after the blasts where compared with previous photographs to determine how many vehicles had been destroyed. Allianz even supports a pilot-to-business marketplace, FairFleet, which links pilots with businesses in need of UAS, offering insurance coverage and claims settlement services.

However, new risks and the potential for misuse of UAS technology need to be considered, too. UAS raise two priority safety concerns: mid-air collisions and the loss of control. A mid-air collision could happen if the pilot cannot see and avoid manned aircraft in time, especially those that normally fly below 500 feet, such as helicopters, agricultural aircraft and aircraft landing or taking-off. Reports of UAS sightings from pilots, citizens and law enforcement have increased five-fold over the past year in the US; while there have been a number of near-miss incidents around the world including in China, Dubai, and the UK.

Loss of control can result from a system failure or if the UAS flies beyond signal range. AGCS sees a major risk in loss of control from frequency interferences and other factors. A pilot losing control of a UAS during a building inspection could result in a total liability easily in excess of $5 million, if the UAS crashed into a truck or shop, for example.  Even a small UAS could cause as much as $10 million in damage alone when hitting an engine of an airplane. An emerging peril is the potential terrorist threat from UAS targeting critical infrastructure such as (nuclear) power stations or live events. Other scenarios include hackers taking control during a flight, causing a crash, or hacking the radio signal and transmitting valuable recorded data from the aircraft from another control station (“spoofing”). There are also many public concerns over UAS around privacy issues.

A primary concern is the lack of consistent standards or regulations for the safe operation of UAS around the globe. “In many locations, there are few or no pilot training and maintenance standards,” explains Van Meter. “In addition to regulation, education will continue to be key to ensuring safe UAS operations.” Training has a crucial role to play in reducing the risk of an incident occurring, with novice control a major cause of loss activity. Training should include meteorology, emergency instructions, air traffic law, including flight rules over buildings, system maintenance, flight time calculation and on-board camera image use.

In many locations around the world no registration of UAS is mandatory, effectively affording the user anonymity in the event of a loss incident. “However, in future, identification of both UAS and operator will be essential to maintain proper liability in general,” says Kriesmann. “Introduction of car registration-style schemes will be needed sooner or later.”

Insurance can protect both operators and the public from risk of mid-air collision, as well as physical or property damage or injury to others. Manufacturers, owners and operators of UAS, as well as businesses that sell and service UAS, are exposed. So–called drone insurance is a fast-growing area of the insurance industry and different coverages are available, depending on the type of use. “Whether you run a coffee shop or a truck delivery business you need insurance to run your business. Drones are no different,” Van Meter explains. “Commercial operators of UAS will require at least $1 million of insurance coverage to protect against risk exposures.” Assuming growth projections for the commercial industry materialize there is potential for the drone insurance market to be worth $500m+ by the end of 2020 in the US. Globally, its value could approach $1bn.