The field of robotics is exciting for many reasons

The versatility of the field makes it especially intriguing. Companies aren’t competing for the same goal; they’re attempting to solve different world problems. Although the number of robotics startups seems grow every day, some are already having an impact while others are preparing to unveil exciting new products. We take snapshot of 10 companies that demonstrate the depth and breadth of the field.

Generic Robotics is poised to make an impact in a critical field: Surgery. Their SimuTouch technology aims to combine force feedback with other senses, making it a valuable platform for letting people practice surgical procedures in a simulated environment. Repetition is key for learning skills, and robotics can help ensure training surgeons are reading to go when they first start working with people. Furthermore, robotic assistance is poised to take over surgical theaters, and simulated training will help current surgeons get up to speed. Combined with their SimuTeach and SimuSolve technology, Generic Robotics is likely to have an impact in other fields as well, including dentistry and veterinary care.

While the concept of combining humans and robots still seems like science fiction, it’s actually a reality in more than 180 rehab centers. Ekso Biotics, which has been in operation for more than a decade, offers a number of suits and other technologies that give patients extra strength, helping them relearn how to walk and perform other tasks. In particular, their technologies are helpful for patients who’ve suffered from strokes or spinal cord injuries, two fields where modern medicine has seen real limitations.

Their EksoWorks technology, on the other hand, is designed to keep workers in fields ranging from construction to automobiles safe while providing them with superhuman strength and other abilities. Even if robots don’t fully replace humans in certain fields, human-robot hybrids are likely to become a staple in industry.

Japan’s SoftBank has long been a leader in innovative technology. Although it might seem unusual for a banking company to enter the field of personal robotics, SoftBank has developed Pepper, a smaller humanoid robot, to greet customers as they arrive and, in some cases, to stay permanently in homes. Able to recognize basic human emotions, Pepper adapts his behavior, and SoftBank touts his ability to communicate in a human-like manner. Japan has a problem with aging, as low birthrates mean a significant portion of the population is elderly and younger generations are typically busy with work and unable to provide the companionship many older people need. As this trend continues, Pepper, or similar humanoid companions, are likely to become popular throughout Japan and exported elsewhere in the world.

When thinking about robotics, we tend to focus on their physical capabilities. The software that powers them, however, serves as their brains and even hearts in a sense. Rethink Robotics aims to transform industrial robotics with its Intera 5 platform, which features force-sensing capabilities and various grippers and cameras. It can be trained by demonstration for a range of tasks, making it easy to get up and running in practical scenarios. Furthermore, there are several means of programming it through software, letting beginners and advanced users alike fit it to a range of tasks. Task-specific robotics have been around for some time, but the new era of more general robotics, such as those developed by Rethink Robotics, are poised to have a significant impact in many fields.

Perhaps the most famous company developing robotics is Boston Dynamics. Several videos showing their robots’ capabilities that have gone viral and their CEO and Founder Marc Raibert’s inspiring TedTalk has been watched over 2 million times. At the heart of the MIT spin-off’s success is their robots modeled on animal-like walking and maneuvering, abilities that place their products in the uncanny valley despite having completely robot-like appearances.

Balance and an ability to respond to pushes and other unexpected events make their products appropriate for real-world environments, and pairing them with sensors makes their robots surprisingly capable. With military funding and a track record of innovation, Boston Dynamics products will undoubtedly be seen in a host of environments in the coming years.

Founded in December of 2015, Starship Technologies aims to fill a specific gap: Delivery. Transportation costs are already low thanks to established technologies, but the last mile of delivery relies on humans, making it much more expensive. Starship Technologies is focusing on autonomous devices capable of handling the difficulties of urban delivery. Armed with GPS capabilities and cameras, these devices have already been used in the small scale, and they can be controlled remotely by a human operator if they encounter problems along the way. Furthermore, integrated microphones and speakers make them useful communication devices as well. Don’t be surprised if the next meal you order is delivered by a robot. Janus Friis, co-CEO & co-Founder believes they have “built the world’s leading semi-autonomous delivery robot”.

The robots are designed to manage local delivery of packages, groceries and food. The robots will deliver up to 10kgs/20lbs worth (three shopping bags) within 15-45 minutes, to homes within a 2-mile radius on demand. By the end of 2017, the robots had completed thousands of deliveries and travelled over 100,000 KM worldwide to date. Starship Technologies have many plans for 2018, aiming to surpass more robot driving milestones.

In terms of money and health, nothing can beat a meal cooked at home. However, time and talent limitations mean many people rely on takeout or dine-in for convenience. Moley Robotics is focusing on a radical idea that can change our relationship with food: Robotic kitchens. Paired with their automated kitchens will be access to a large library of recipes available, and internet connectivity will let homeowners try out several new meals per day if they choose. Furthermore, the company is teaching its robots meals prepared by world-famous chefs, enabling people to taste a version of meals diners pay a significant premium for on a nightly basis. Inventor Mark Oleynik’s vision was to enable everyone to have “your grandmother’s dish that you love” on demand.

Imagine  – Now you can have it cooked by the robot anytime you want. And also your great -grand children can watch the ‘grandmother’ preparation and taste the same dish. I think it’s a nice option to save family traditions for the future generations, isn’t it?

Robots have the ability to change the world, but there are two limitations to current initiatives: Cost and intellectual property restrictions. OpenBiotics aims to provide a suite of software tools for robotics and, even more radical, open-source hardware designs. The group touts its success in cost and weight and has already unveiled a model that costs less than $100 and weights less than 200 grams. A more anthropomorphic model provides a more human look while still costing less than $200 and weighing less than 300 grams. Manufacturers, researchers, and others interested in robotics can download plans and software needed to replicate OpenBiotics designs at no cost.

Surgery requires precision and a steady hand, two aspects where robotics have a clear advantage over their human counterparts. However, humans still have the ability to rely on experience and judgment, so humans still perform the vast majority of surgeries. Cambridge Medical Robotics appears poised to be among the first offering robotic surgery options by using human-controlled robotic surgery systems. An emphasis on training means their offerings will be thoroughly tested by entire surgical teams when used for surgery, and the physical design of robotic devices may enable innovative and less invasive forms of surgery in the coming years.

Technology has long been a driver for agriculture, enabling farms to feed the world’s growing population. Since nearly all of the world’s best farmland is already being used for agriculture, efficiency is a top concern. Blue River Technologies helps smaller farms eliminate human labor demands, letting farmers sell at a lower price point while still maintaining a profit. Computer vision, combined with artificial intelligence, lets their products identify weeds individually and inform decisions for how to best deal with them.

Herbicide resistance among weeds is on the rise, making it more difficult to maximize crop yields. Automation and reduced herbicide use can help slow this trend and make food more affordable for the developing world.

Robotics is a rapidly moving field and who knows what’s next. One thing’s for sure – it’s here to stay and despite the fear mongering, the future looks bright. 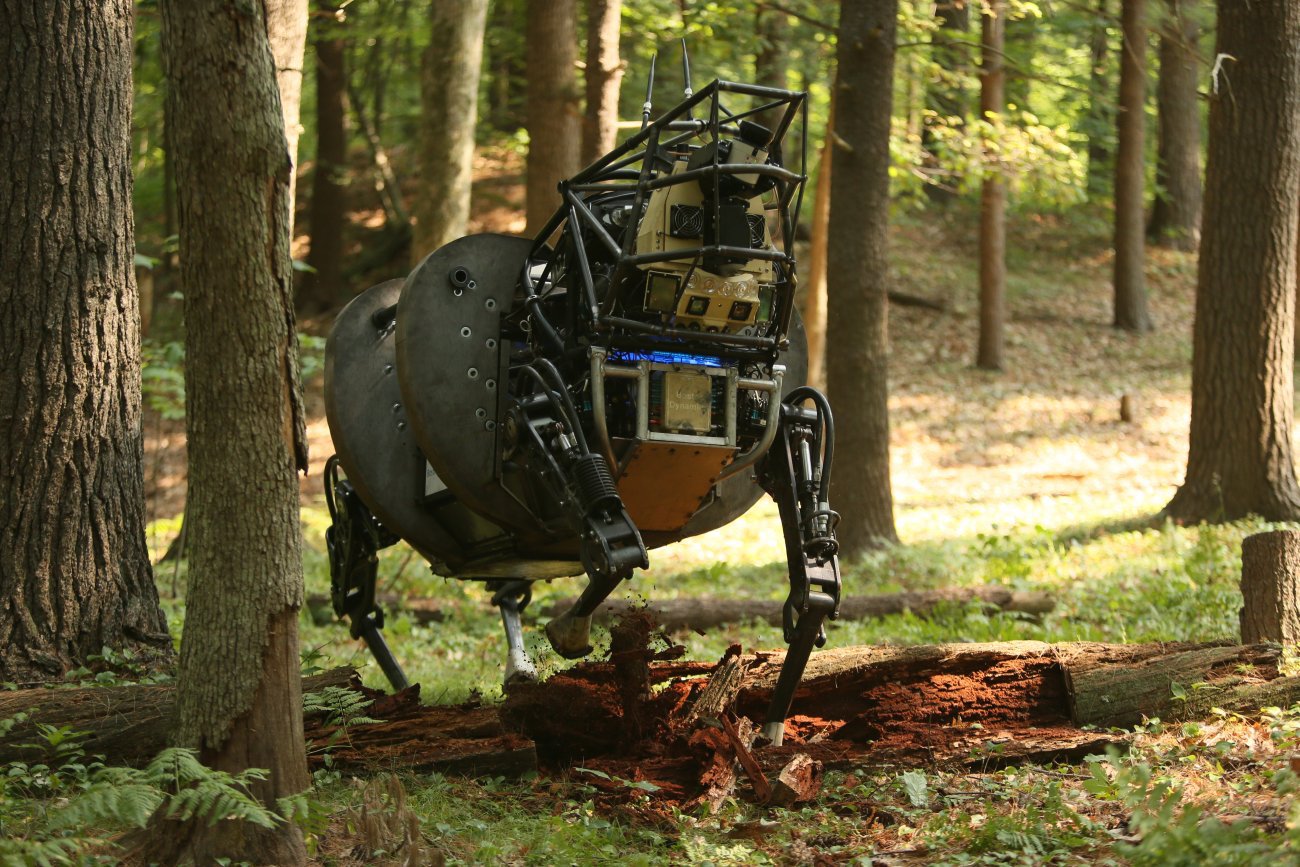