Arguably the hottest among them right now is Clubhouse, which grew into a $900 million company in a single year…with just 12 employees. Those dozen employees were able to build a platform incredibly fast and then enable network orchestration, empowering millions of citizen creators to share live audio content with invited audiences.
Similar network orchestration and citizen developer strategies are also the fuel behind the skyrocketing popularity of online gaming platform Roblox. Roblox added 80 million users in 2020 – driven almost entirely by word-of-mouth virality. With Roblox, very young ‘citizen developers’ using low-code techniques can create, market, and monetize their own games on the platform. For example, the Roblox game Jailbreak, a $1 million/year hit on the platform, was developed by a small remotely-distributed team of teenagers. Enabling these opportunities positioned Roblox for its recent $30 billion IPO.

Clubhouse and Roblox hit the zeitgeist, but it wasn’t by accident. Enterprises across industries need to be paying attention to how these companies got where they did as fast as they did, and here’s why.

Network orchestrators create peer networks capable of fostering meaningful interaction and shared value creation. Within these network frameworks, individuals are free to collaborate and contribute everything from content to products and services. While it’s tempting to label this a new business model given its current spotlight, many of the most established and successful companies in the world are network orchestrators – from Facebook to Zoom, from Uber to GitHub.

When it comes to content creation, network orchestration platforms provide streamlined paths for publishing content and building an audience. Anyone can become a radio host on Clubhouse, a game developer on Roblox, or a journalist on LinkedIn, Medium or Facebook. Each platform offers global audiences whose attention is ready to be pulled in. The drive to connect with those audiences is the catalyst accelerating citizen marketer and citizen influencer trends.

Citizen development, from teenager to enterprise

Because citizen developers have low-code (or no-code) capabilities at their disposal, development starts to become as simple as content creation. Developers still years away from a driver’s license are able to build their low-code skillsets by watching YouTube tutorials and discussing techniques over Discord (two more network orchestrator platforms).

But make no mistake about it: enterprises have as much opportunity to gain from citizen development as independent creators do. Low-code development, enabled by open source and freely available code libraries, multiplies speed and agility when it comes to launching (and quickly iterating) enterprise applications. Enterprises can now utilize their existing teams – those without computer science degrees and budget-limiting salaries – as ‘citizen developers’ to create software levels more affordably than was possible only 1-2 years ago.

It’s not just the cost gains. Development is also far faster; enterprises taking a low-code tack tell me that projects that would take eight months are now completed in just three weeks. The tools are mature enough now that low-code’s advantages are there for the taking, whether you’re a billion-dollar B2B enterprise or a gaming ecosystem for kids.

With a low-code strategy, citizen developers can drag-n-drop blocks of pre-written code, ready to be assembled, Lego-like, into new applications. These blocks can be used as they come, or customized to suit an application’s particular requirements. Done right, low-code development also taps myriad APIs and modules that democratize access to technologies that would otherwise require expensive expertise to wield.

For citizen developers – whether operating independently or on enterprise teams – low-code development offers a low barrier to entry. The culture shift might very well prove the biggest hurdle in adoption. Once implemented, however, a low-code strategy shows what’s now possible, with rapid application testing effectively future-proofing enterprises through lower-cost agility. Enterprises can even enhance legacy systems with flexible low-code add-ons, further accelerating modernization and preparedness for whatever comes next.

The low-code impact on open source, and transforming enterprise infrastructure

Microsoft predicts that 500 million new apps will be built over the first half of this decade, surpassing the number of apps created in all of the previous 40 years. To meet this anticipated appetite for applications, Microsoft estimates that 90% of those new solutions will need to be built using low-code tools. There just isn’t enough hard-coding expertise (or budget) to go around, but that doesn’t need to be a problem. Enabling less-technical citizen developers to leverage reusable code libraries, and rapidly prototype and deploy solutions, will be increasingly essential to enterprises from a competitive standpoint. Empowering creatives as developers will also transform development productivity. For these reasons, Research And Markets foresees the low-code market growing 18x in the next decade, from $10 billion in 2019 to $187 billion by 2030.

In response, freely-available open source code libraries will only multiply in their availability and capabilities. Smaller and smaller segments of reusable code will continuously expand the possibilities of low-code development.

The future of enterprise application development

Low-code is a seismic transformation on par with the shift to the cloud. The operational efficiency gains are too big to ignore; enterprises will be able to develop, launch, and iteratively optimize applications with ease, and at an unprecedented pace. In tandem, enterprises will incorporate the power of network orchestration as well, encouraging customer creators and citizen marketers. Considering the speed with which this transformation will arrive, the time to lay the cultural groundwork and begin a low-code strategy is now, if not yesterday.

Jon Nordmark is the CEO at Iterate.ai, whose innovation ecosystem enables customers to monitor millions of emerging technologies and build pilot-ready applications faster. Previously, Jon was the co-founder and CEO at eBags.com, which was acquired by Samsonite in 2017. 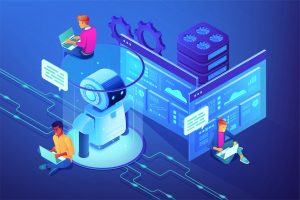 Cutting through the noise: 10 tips for choosing the right low-code platform for digital success