What are Microsoft cooking up at their AI & IoT labs?

When we upgrade to the latest flagship device for our business or home, seldom do we consider the complicated and painstaking R&D process that takes concept to delivery.

However, that’s exactly what engineers like Microsoft’s Sean Kelly think about. Sure, he enjoys being able to use ever more connected devices, but what he enjoys more is making them, and helping others to bring their ideas to fruition. “I’m in a room with every conceivable machine I could ever want to use, surrounded by a team of experts in everything I don’t know well,” he says.

In locations around the world, Microsoft’s IoT & AI Insider labs are on the bleeding edge of device creation and its engineers are researching and developing the next generation of intelligent and connected devices and software.

Unlike traditional programming, machine learning is a model of programming that acts more like the human neural network. It combines previous inputs and their subsequent results in order to provide a more efficient and accurate solution to problems. And like the human brain, while not always correct, it is able to provide powerful answers. Previous problems that were thought to be too difficult to solve using programming can now be solved by harnessing the power of machine learning and artificial intelligence. By combining  AI technology with IoT devices at inception, Microsoft are aiming foster start-ups to solve some of the most pressing business challenges.

Guests at Microsoft Labs are treated to what amounts to an engineer’s wonderland. From seed to fruition, ideas are conceived, built, tested, and refined, all under one roof. At this intersection, hardware meets firmware, software meets testing, taking the product development cycle from a walk to a sprint

PiCo co-founders Andrew Lowe and Tony Nguyen spent two weeks at the lab to get to grips with the Azure platform, integrate security, and prepare their retail platform for scale.

“It’s a great operation for a cash-strapped startup not to have to go buy all of this equipment so we can actually test what we’re building really quickly, and then turn around and make quick decisions on changes,” Lowe says.

The first stop along the Microsoft Labs tour is the Marie Curie room, which is named after the first Nobel Prize-winner. This is the space in which hardware is built and prepped for firmware.

Traditionally, simple things like computer circuitry printing may take several weeks to months to receive back after sending out for replication. And that’s all while hoping it comes back as expected. In the Marie Curie room, it’s a 10-15 minute process.

Among the wide assortment of gadgets are creative tools like 3-D printers, circuit board ovens, and buckets of solder. When an engineer has his or her idea and is ready to see it and feel it in real life (and real time), this is where they go.

This array of state of the art tools allows the guests at Microsoft Labs to quickly get their hands on a prototype to assess their vision in real time. If a prototype results in a device that has undesirable features, such as being too heavy or having poor signal strength, they can quickly change materials or alter the design in a way to alleviate the problem.

The next phase moves to a room is named after Ada Lovelace, the world’s first programmer. After an engineer has produced their physical prototype in the Marie Curie room, they head here to see if it works as intended. The prototyping process is continual and one that requires engineers to build, test, tweak, and repeat until a final product is fully developed, produced at scale, and shipped to customers. Once satisfied with the physical prototype, the firmware and testing results engineers head to the Mae Jemison Room.

While most of the rooms at the Microsoft Labs resemble that of an ultra modern-day factory line, the Mae Jemison room is built to feel like a boardroom. Named after the first African-American female astronaut to orbit Earth, this room serves as a conversation room intended to facilitate team collaboration and idea dissemination. Each day, teams gather here to discuss the goals of the day, as well as what was accomplished in the previous day.

In addition, this is where analysis occurs. Teams take the information obtained through the use of their new completed prototypes and discuss it. They ask themselves what the data means and what they can do to act upon their discoveries.

The Microsoft Lab’s two, soon to be three locations are unlike any other prototyping labs in the world for small and large businesses alike. It’s rare to find somewhere you are able to build, program, and test your prototypes, then analyse the results and information obtained in order to further refine the final product.

Cyra Richardson, Microsoft’s GM of IoT biz dev explains that two weeks in the Microsoft Labs can save six months outside of it. Six months of time savings for an IoT and AI device build is the difference between tens, if not hundreds, of thousands of dollars. In addition, it allows them to drastically lower the amount of time required to get a product to market. Being first to market is a needle moving advantage for tech companies trying to stay on the forefront of innovation. 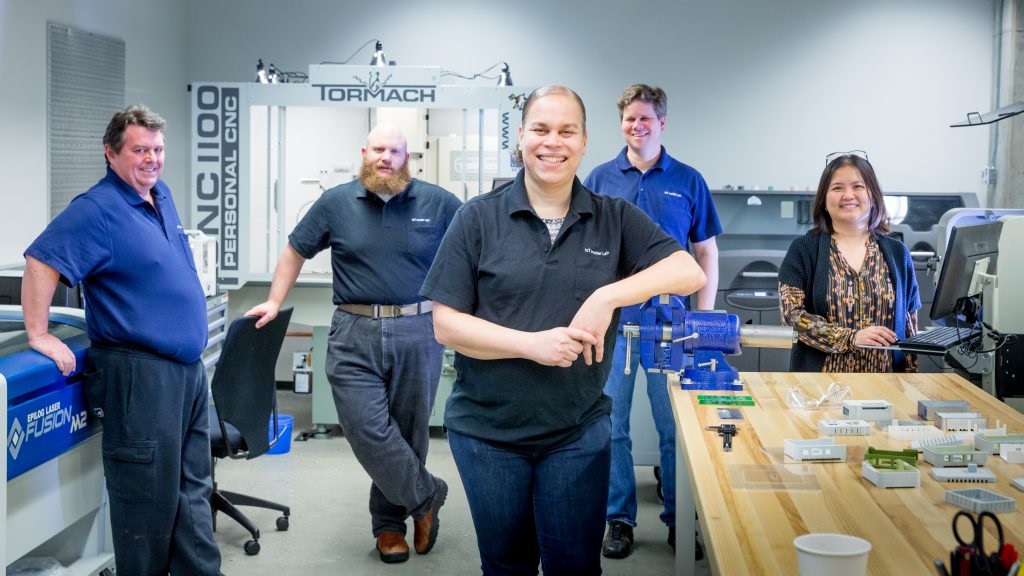