Each has their own strengths and weaknesses and it’s important to understand the use case of the various tokens individually, to further understand where each would be best placed in an ever changing digital market.

Given the ultra fast-growing popularity of NFTs – tell us what hasn’t been NFT’ed yet – and appearance of SBTs, the natural desire to use them in every way possible is understandable. Despite the enthusiasm, someone has to break the news; often NFTs and SBTs are not fit for purpose. From fraud through to privacy issues, here are the top use cases that NFTs and SBTs fail to deliver on, or would be better “augmented” by fit-for-purpose digital identity solutions, such as self-sovereign identity (SSI) including VCs.

Stemming from the above use case, in the perceived absence of decentralised digital identity solutions, NFTs started being used as an identity proof of Decentralised Autonomous Organisations (DAO) membership on Discord. People join the DAO’s private channels by proving they own an NFT issued by the DAO. However, often they have been able to sell the NFT and still remain in the private channels of the DAO’s Discord server. This is because very few DAOs have the ability to constantly monitor whether the NFTs still belong to their members. On the other hand, SSI bypasses this issue through the use of a VCs which can easily be checked on a regular basis with new approaches becoming available to ensure the same individual is accessing the community.

As soon as a collection is launched on a chain, people tend to copy and “recreate” that NFT on a different chain.Market forces then price them accordingly. This can lead to situations where there are multiple versions of an NFT. At the moment, we let the free market decide, which can lead to speculation over which one is authentic. Imagine if we could prove the NFT’s origin, cross-chain, and then tie it to an identity? This is already possible with SSI and VCs proving ownership over an account or address.

In addition to NFT creation, SSI and VCs can help prove who has owned and/or currently owns NFTs across their lifecycle.

Outside of NFT marketplaces, e.g. OpenSea, peer-to-peer (P2P) trading is appearing on Discord and other platforms. However, unlike the former, there are no ways to verify if a person has actual control of the assets or funds, which leads to scams. Instead, via SSI and VCs, it would be possible to prove ownership of an NFT without exposing the account outside of the individuals trading

This same approach can be extended beyond NFTs to any other assets or proofs. For example, it would be possible to prove ownership of fungible tokens above a certain threshold of tokens (let’s call this the whale threshold) without exposing the underlying account.

Overall, SSI can lower the potential for scams and fraudulent behaviour around trading tokens (fungible or not) through p2p trading.

Vitalik Buterin (founder of Ethereum) and co-authors Puja Ohlhaver, E. Glen Weyl recently introduced a new token concept for web3 – soulbound tokens (SBT). These are described as a non-transferable type of non-fungible token. Unlike usual NFTs, SBTs won’t be transferable but they may be revocable. Issued by an entity or an individual, they are intended to be linked to a specific organisation or identity. SBTs are proposed to represent various types of personal information, similar to that of an NFT but with a heightened level of security through its inability to be transferred to another individual through a transaction.

However, SBTs seem to be coming from the opposite privacy paradigm than SSI. This could have some dangerous unintended consequences, such as Decentralised Society (DeSoc) being public-by-default in terms of philosophy and as a result, publishing data on-ledger in public for better or for worse. No wonder why they have received a significant amount of criticism for creating a system similar to China’s “social credit system” where an individual’s behaviour is public to others, worsening the individual’s privacy (E. Barrett, Fortune, 2022).

Finally, to illustrate the difference between the alphabet soup of NFTs, SBTs and VCs take a look at the diagram below. The differences largely come down to the privacy stance each technology uses with VCs avoiding any traceable transactions on ledger whereas NFTs and SBTs aiming for the opposite. 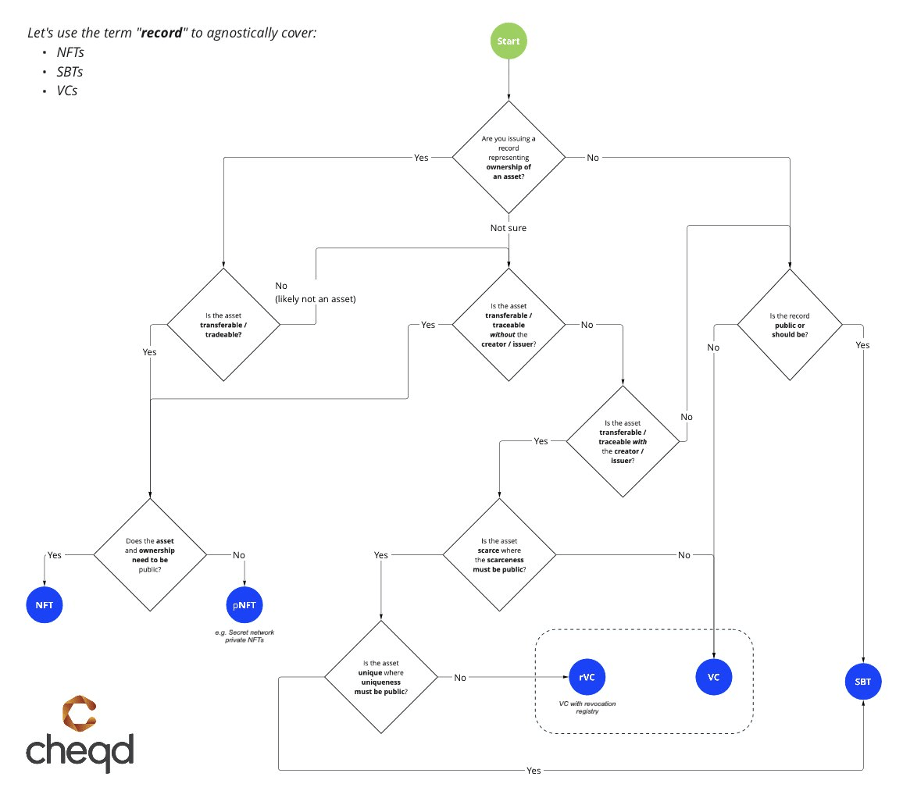 Ultimately, each one of these will find their uses but care should be taken to avoid creating another scandal similar to Clearview AI where people release data into the world without being truly aware of the downsides it can create. Privacy, you don’t know what you got till it’s gone!

If you liked this blog, cheq out our thoughts on how NFT and SSI combined unlock a new gaming experience. 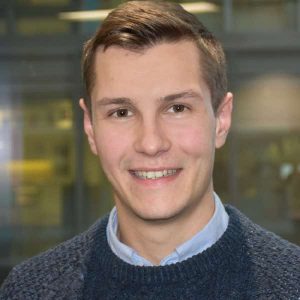 Fraser Edwards is Co-Founder & CEO of cheqd. Fraser Edwards (CEO), has a rare skillset, blending technology and business acumen andrarer experience. He has deep consortium and self-sovereign identity knowledge. He’s led the Known Traveller Digital Identity (KTDI.org) project with the World Economic Forum and Dutch and Canadian governments amongst the stakeholders. He also has blockchain payments expertise through architecting cross-blockchain payments on theJasper-Ubin project with the Singaporean and Canadian Central banks. Fraser has patents in cross-ledger payments. His career has been a series of unique challenges, one after the other and he is thrilled to be taking on the adoption of self-sovereign identity as his next.
Featured image: ©Chaosamran