Is any profession immune to the influence of artificial intelligence (AI)?

Every day, we’re confronted with reports on the impact that intelligent systems and algorithms will have on low skilled or process driven roles, whether that’s Uber drivers, accountants or legal professionals. But we tend to think that the so-called ‘creative’ professions, such as design and the arts, will always require the human touch. After all, computers can’t be creative – can they?

What does it mean to be creative?

Definitions of creativity have evolved over the centuries and, up until the Renaissance, the power to create was generally considered the preserve of the gods. When Plato is asked in The Republic: “Will we say, of a painter, that he makes something?”, he answers: “Certainly not, he merely imitates.” And it wasn’t until the 20th century that creativity became associated with fields outside the arts, and our current definition became accepted. Most now see creativity as the act of exploring and acting on new ideas and thinking; something that is as possible in business, as it is in a studio.

Yet, when it comes to AI, many sceptics are taking a Plato-esque view, arguing that computers are only doing what they were programmed to do, and can’t create something new on their own. But this view is rapidly coming into question, with examples of AI creating art, penning novels and designing products; often doing the job as well, if not better, then most humans. With the technology, still in its infancy, who’s to say it won’t eventually replace us completely?

In product development, when assessing whether an idea or design is likely to be successful and profitable, we often talk about the need for feasibility, viability and desirability. Feasibility and viability are fairly black and white, with considerations over availability of materials, manufacturing techniques and profit margins, for example. But where it usually gets more complicated is around desirability, which is almost impossible to calculate or predict in any kind of logical way.

Desirability is influenced by innumerable cultural trends, which are all happening simultaneously and constantly evolving. I would therefore argue that understanding cultural relevance and creating desirability amongst people is something that will often require human input; otherwise the chances of adoption by users are rather low. In other words, a computer might be able to write a novel but if no human reads and appreciates the work it won’t affect human culture.

The complexity of creating cultural relevance and desirability means that, in all likelihood, humans will always be involved in designing, but with AI working alongside to augment the creative process. (Of course, this is not true for parallel cultures that machines might create for themselves without human interaction or even awareness.)  In one scenario, the technology could be used to provide verbal, visual or other stimuli to help move ideas forward or nudge our thinking in a new direction. There is a concept in communication theory known as ‘expectancy violations theory, which, in its positive form, can be misunderstood as introducing new ideas to help us look at a problem in a different way or even help us better understand the problem; this could be one of the roles played by AI in the future.

Intelligent technology could also allow us to record and correlate our processes more effectively across a team, business, or whole industry, to better understand and harness other approaches and ways of thinking. Imagine if an AI system was constantly working away in the background, to connect concurrent projects and ideas in a way that can’t be done manually. We would be able to learn more quickly and comprehensively from the failures and successes of others, rapidly speeding up the evolution of ideas and innovation.

So rather than seeing AI as a threat to designers, we should instead think of it as an opportunity to do things better and streamline how we work. The role of a designer will evolve and new roles will be created; many of which we can’t even conceive today. But any change will be gradual and humans will be part and parcel of making it happen.

Needless to say, there are numerous cultural, ethical and existential challenges to be managed and controlled if AI is to be successfully deployed in the design process. First and foremost: privacy, as to effectively augment how we work, AI will need to observe and record in detail how we behave and interact in our daily lives. We therefore need to think about how comfortable we are with AI collecting and storing all this information about us. And what if this data ends up in the wrong hands?

Another big question comes back to culture and how our work communities will be affected by the introduction of intelligent technology? As humans, how we work is so caught up with our emotions, our relationships, passions and struggles. What will happen to this human energy when AI enters the mix? Will our engagement and enjoyment of work be the same if it becomes like an iPod playlist?

There’s no doubt that we are on the cusp of a change that will be as great, if not greater, than the industrial revolution. It will transform our productivity, how we work, and what it means to be creative, leading to innumerable big questions and challenges along the way. But now, as then, this change isn’t something to be scared of. If anything, with machines to take on the hard graft and more monotonous tasks, the need for creative thinking will be even greater. And that can only be a good thing for designers. 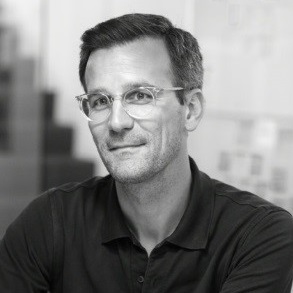 Michael Held is Director of Design EMEA & APAC at Steelcase. He joined Steelcase in March 2014 as Design Director for the Asia Pacific region based in Hong Kong. Since 2016 his responsibilities also include the EMEA region (Europe, Middle-East, Africa). Previously, he was Director Design Management for Product, Communication and User Experience Design at Phillips Electronics in Hong Kong and Singapore.